On this site you find the latest English press releases. For German press visit www.glbasic.com/site=presse, please.

Dream Design Entertainment is proud to announce the release of version 10 of GLBasic, it's cross platform BASIC programming language.

GLBasic was updated to support compiling for Android devices as well as the WebOS powered devices. Together with the iOS platform from version 9 the big markets are covered properly now.
This version also bring new features like automatic screen orientation handling and a package management for all platforms.
Enhancements at the compiler allow the use of TYPEs (structured data) declared in external source files. TYPEs are extended to contain member functions as well.
Last but not least, GLBasic's V10 was under a very long beta stage which ensures a very robust release.

Dream Design Entertainment is proud to announce the release of version 8 of GLBasic, it's popular BASIC programming language.

Following feedback and suggestions from its users, GLBasic has been vastly updated to include many new features, including: 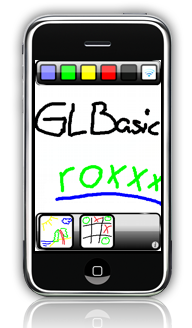 iPhone games in BASIC, not objC


As the iPhone/iPod Touch becomes the number one handheld gaming console due to the clever iTunes App-Store integration, the large variety of really brilliant games and the wide acceptance for the new input methods, programmers demand an easier way to program games. Especially beginners find it very hard to program in objective C, the programming language of choice. Apple's choice!

The creators of GLBasic listened to these screams. With the new version 7, the GLBasic SDK provides a Windows development environment for programming games and applications in a very easy to learn programming language. The programs can be built for several target platforms directly from the Windows IDE. For the iPhone, however, a Mac is required for legal reasons. But GLBasic prepares all the required work for you, so it's just a single click to have your program finally running on the real iPhone hardware.

As a proof of concept one of the GLBasic developers, Gernot Frisch, made a nice doodling application with a funny video on http://scribblemp.glbasic.com. It seems that this program will be available for free in the App-Store soon.
Further information on GLBasic can be found on the

An all-purpose handheld: the new portable game console and media player GP2X Wiz, by Game Park Holdings not only offers a 2.8 inch OLED display for the first time in handheld gaming history, powered by a 533MHz ARM9 processor with a 3D chip. It also provides a Linux operating system, and thus open doors for all hobby developers. 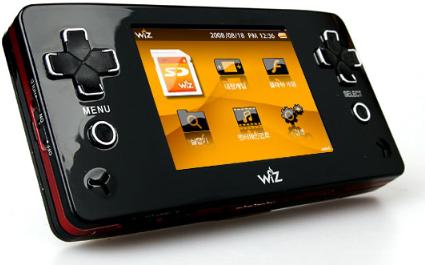 OLED displays have, in contrast to conventional LCDs, the advantage that they have a very wide viewing angle and thus a good readability from everywhere. Also they feature high contrasts and significantly darker black, brighter white than ordinary LCDs, thus bringing the video game experience and a completely new dimension. Since the pixels are not covered by an darkening LCD layer this technology consumes significantly less power in comparison to conventional LCD screens.

The sleek, glossy finished device fits with its 121/61/18 mm at 136 g perfectly in any pocket and has an internal memory of one gigabyte and a built-in SD card reader for expansion. The preinstalled operating system plays movies in DivX, XviD (MPEG4) format as well as all common audio formats. The designers have not forgotten to include a TV connector adapter cable. Data can be transferred via USB cable or by swapping memory cards.

The big difference to common game consoles like the Nintendo DSi and the Playstation Portable (PSP) is that Game Park Holdings actively supports independent developers, and therefore offer a legal way of home brewing for handhelds. This was quickly accepted by the developers of GLBasic who extended their BASIC development environment to support the GP2X-Wiz console with the latest version. The famous developer community for the predecessor model GP2X is expected to supply the GP2X-Wiz with great software and many free games in the next month.

After the delay of the sales launch in the last quarter in favour of an intuitive user interface with multiple languages, the GP2X Wiz can be ordered for about 150,- Euro from www.gp2x.de or www.play-asia.com.

Game Park Holdings has announced a wifi dongle for the summer coeval with an online shop where developers can sell their own programs for low cost.